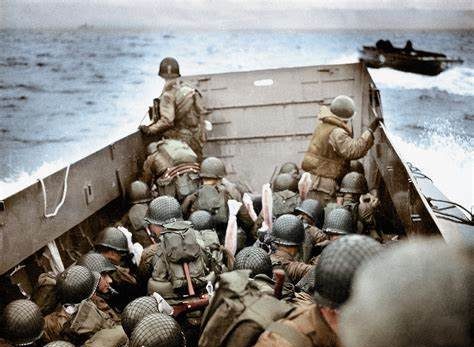 Today is the 76th anniversary…

of D Day, when 155,000 brave young Americans joined British and Canadian brothers to free France from occupation by Hitler’s forces.
12,000 German soldiers faced them, having occupied the strategic bluffs overlooking Omaha Beach.
The Germans, prepared for D Day over 3 years. During that time, they prepared for this deadly day. Many challenges faced the Americans and their brothers in arms.
Firing almost continuously from fortified bluff positions, using tank guns, “zipper machine guns, able to fire 25 bullets per second, and thousands of mined obstacles embedded in the sand of Omaha Beach, clearly, the Germans held the strategic advantage.
Beaches along the Normandy coast, were covered with hundreds of large concrete obstacles, piles, iron boxes, large metal tri-pods, and thousands of miles of razer sharp, concertina wire strung all along the beach.
Mines were everywhere. Together, they presented a formidable obstacle of death and destruction, for the young men to overcome.
Higgins boats, shown in the first picture, brought the young men from landing ships in the English Channel to Omaha Beach.
A Higgins boat carried 35 men, each with a rifle, 70 pounds of ammunition, supplies, gear and a poncho. Many of the Higgins Boats, never made it through the obstacles to Omaha Beach. Hitler called these obstacles, his “Great Atlantic Wall”. Many young men drowned in the waters off Omaha Beach.
For the Higgins boats that made it to Omaha Beach and dropped the front ramp, a blistering stream of German bullets greeted them. ‘
Sixteen of those young heroes, hailing from Bedford, VA, never got a shot off. Many were killed on the beach, some of them cut in half by never ending machine gun fire and explosions of mines embedded in the beach. This was the largest, per capita loss for any small town in America. In 1944, Bedford had a population of 3200, and today, about 6,000. Four more “Bedford Boys” died a few hours later.
One of the stories in my second book, “Angles on the Battlefield, is entitled “Approaching Omaha Beach”. Told through the eyes and words of Marvin Young, of Roanoke, VA, who followed the Bedford brothers onto Omaha Beach.
“Angles” will publish in the fall of ’20, and contain 38 stories.
We will follow this post with a video post next week, describing some of the challenges Marvin and other brothers faced on Omaha Beach and days later. Till next time—- 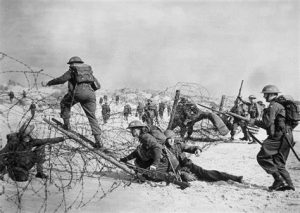 Credit to the Denver Post for the photos used here.